Mention history to many people in southwest Riverside County and blank looks are common. Since when are tract homes and strip malls interesting?

Jeffery Harmon is out to inform the uninformed with his new history book, “Tales from Southwest Riverside County.”

He has been writing about the local past for nine years and chose what he considers the best of his more than 100 pieces for his book. The 74 tales in the book can be found on Amazon and at the Murrieta Museum. Among his favorites are the first aviators to fly through our skies in 1913, another guy nicknamed Daredevil who roared through in 1909 on his way to a speed record on what was called an “Indian motorcycle,” the nefarious area activities of the yeggmen (criminal transients who rode the rails about 110 years ago) and, finally, a poignant visit to the De Luz home of Old Town Temecula legend Bob Morris.

“An antique 1936 fire engine labeled ‘The Sod Buster Racing Team’ resides in the silence like a wise old king,” Harmon wrote of Morris’ expansive property. “Oak trees, buildings, piles of metal and antique machines seem to assemble as musicians playing a majestic symphony about the artist’s life.” Harmon and his prose were center stage at a recent author’s signing at the local museum.

It was appropriate, given that he’s president of the Murrieta Valley Historical Society.

His first customer was lifelong Murrieta resident Peggy Goffman, 83, a member of the Thompson clan, one of Murrieta’s founding families.

After buying four books for her family, she said Harmon’s work refreshes her memory of local history. “If you want to know anything, Jeff is the one to go to.”

Some 30 people passed through the museum in an hour, most scooping up copies of Harmon’s work. He sat at a table in front of the perfect backdrop, a Murrieta historical timeline on the wall behind him.

Longtime residents and brothers Dudley and Calvin Sykes also came by and hung out with the many Murrieta old-timers gathered there.

“It’s better we meet this way than at a funeral,” Dudley Sykes said.

In the introduction to Harmon’s book, he wrote that he was never taught the history of the town in which he grew up, Torrance. After describing the home of his childhood, he wrote, “There was a history here, but I didn’t know any of it.”

He moved with his family to Temecula in 1987 and in 2001 became a volunteer docent at the Temecula Valley Museum. He was introduced to our history and realized that the facts of the past had often been embellished over the years, “seven thousand sheep had become one hundred thousand sheep,” he wrote of one such flaw.

Scouring the archives of local newspapers, he found wonderful stories about important pioneers that were now forgotten.

“That research inspired me to begin a new quest to find the local news story that no one had heard about and share what I discovered,” he wrote.

Harmon, 50, is a substitute teacher who also works at a sandwich shop. He wrote that after their children J.T. and Alexis were born, he and his wife Michelle spent weekends driving to Southern California’s museums and historical sites, providing the kids the history education he never had growing up.

Thanks to Harmon’s wonderful new book, local residents can now educate themselves about our history. 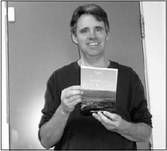 Jeffery Harmon, a Murrieta historian, wrote a new book about the history of southwest Riverside County.

Click here to see this page in the eEdition: